Why Chernobyl and Chernobyl nuclear power plant are not the same? - «Chernobyl from Kyiv»
Contact us

Why Chernobyl and Chernobyl nuclear power plant are not the same?

Sometimes, for numerous foreign visitors to the Chernobyl exclusion zone, the fact that the city of Chornobyl (or Chernobyl in russian interliteration) and the Chernobyl nuclear power plant are not much connected with each other is a revelation. These have only name in common.
In the mid-sixties of the 20th century, the USSR government was looking for a place to build another nuclear power plant. Among the sixteen considered locations, the choice fell on a site near the village of Kopachi, which is 130 kilometers from Kyiv and 15 kilometers from the city of Chernobyl. This site was chosen for the following reasons: it was convenient for the distribution of generated electricity throughout the Soviet Union, given the location of large consumers; the Pripyat River is located nearby (as you know, nuclear power requires a lot of water for cooling); local sandy land has a relatively low agricultural value.
At the time of the start of construction of the nuclear power plant, Chernobyl was the administrative center of that region and the largest settlement. The city of Pripyat, which later became the largest city (50000 residents) located near the plant, did not exist at that time and began to be built simultaneously with it in 1970. Therefore, the Soviet authorities decided to name the power plant (full name) "Vladimir Ilyich Lenin Chernobyl nuclear power plant".
The name of the city comes from the word "Chornobyl" - herbs, a subspecies of wormwood. There are lines in the Bible that people connected with the nuclear disaster that happened. The text of the New Testament says: The third angel sounded the trumpet and a Star called Wormwood (Chernobyl in Ukrainian) fell to the ground and a third of all fresh water turned into a bitter poison and many people died from this.
In any case, whether it is a private or a group tour to Chernobyl from Kyiv, you will definitely visit the town of Chernobyl, which was once home to 13,000 people, and now belongs to Ukrainian cities with a special status, where people live temporarily. 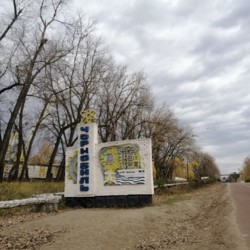