Who lives in the Chernobyl Exclusion Zone at present

As a result of the explosion at the Chernobyl Nuclear Power Plant on April 26, 1986, radioactive substances were released into the atmosphere and huge areas became contaminated with radiation in Ukraine, Belarus, Russia (at that time it was the territory of the Soviet Union, which disintegrated 5 years later) and many other countries of the world. Ukraine and Belarus suffered the most.

The evacuation of the population from the most contaminated lands began on April 27 and lasted until mid-August 1986. More than 150 thousand people were evacuated from the Ukrainian part of the Chernobyl Exclusion Zone alone. There is no exact statistics about where these people were taken. Some were given houses or apartments elsewhere in the USSR, and some settled with relatives.

For a number of reasons (dissatisfaction with new living conditions, a new way of life, longing for a native home, etc.) by the fall of 1986, some previously evacuated residents began returning to their homes without permission. But the peak of returning to their homes came in the spring of 1987 before the start of agricultural work, since most of the evacuated people were hereditary peasants. In addition, new neighbors were not always friendly towards evacuees. Despite the danger to life in contaminated areas, people made a conscious choice to return to their homes. The Soviet government allowed up to 2,000 people to return, but only to the thirty-kilometer zone. The ten-kilometer zone still has the status of a territory of compulsory eviction.

At present, only about 120 self-settled people (selfsettlers)  live in the Chernobyl zone due to their respectable age. About half of this amount live in the city of Chernobyl, and the other half - in eight different villages: Ladyzhichi, Paryshiv, Rudnya Ilinetskaya, Lubyanka, Ilintsy, Opachichi, Kupovate, Teremtsy. Selfsettlers live on their retirement benefits and are engaged in the cultivation of agricultural products for their own consumption (it is prohibited to sell fruits and vegetables or even simply carry them outside the Zone). Local governments provide selfsettlers with electricity. If necessary, they can call an ambulance or go to Ivankov or Kiev hospitals. Once every two weeks, a mobile shop goes to the mentioned villages, selling the most necessary goods (bread, sunflower oil, matches, salt, sugar, etc.). Also, the state with a certain frequency measures radioactive contamination of their households and the presence of radionuclides in farmed vegetables.

Some of the settlers are very friendly and welcoming. They are happy to receive guests from around the world and talk about their present and previous life.

In the case of two or more private day tours with chernobyl-from-kyiv at the request of tourists, we visit selfsettlers to get acquainted with the conditions of their life alone with wildlife.

During the tour around Chernobyl Exclusion zone we will see a lot of people, especially in town of Chernobyl. Most of them are not selfsettlers, but workers of local enterprises, those who work on shift mode there (two weeks inside the zone and next two weeks - outside the zone). 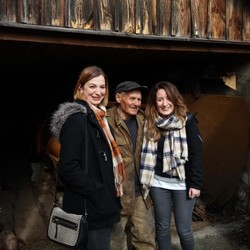 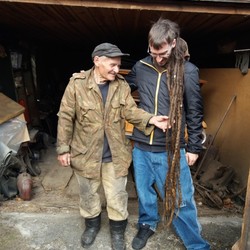 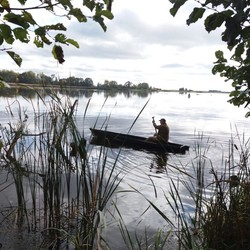 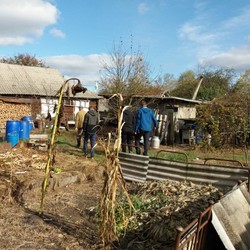