Where the residents of the Chernobyl exclusion zone were resettled? - «Chernobyl from Kyiv»
Contact us

Where the residents of the Chernobyl exclusion zone were resettled?

As you know, a huge number of people were obligatorily evicted from the territories around the nuclear reactor at the Chernobyl nuclear power plant that exploded in 1986. Apart from the territories of modern Russia and Belarus, about 150 thousand people were evacuated from the Ukrainian SSR alone. The most numerous settlement was the city of Pripyat (2 km from the nuclear power plant), then the city of Chernobyl (20 km from the epicenter of the explosion) and more than 150 smaller settlements and villages within a radius of thirty kilometers from the nuclear station.
But how and did authority manage to resettle such a large number of people? Where people were placed? The most populous city whose population was evacuated was the city of Pripyat. About 1200 buses were used to evacuate 50 thousand inhabitants. The main evacuation of the rest of the settlements located on an area of ​​2600 square kilometers took place until midAugust 1986. During the first days and weeks, the evacuation took place to any possible public buildings, such as hotels, holiday homes, dormitories of factories and educational institutions, prepared for operation, but not yet occupied apartments in new buildings (in the USSR there was no private property even for private apartments that belonged to state). Also, many of the settlers were placed with relatives or even unknown families of volunteers.
The Soviet Union, as an authoritarian country, possessed enormous mobilization capabilities and within a fairly short time, from several months to a year, all evacuees were provided with housing. For the former residents of the city of Pripyat, the city of Slavutich was built from scratch, which is now home to 25 thousand people. New villages were built for evacuees or houses in existing villages.
Some, especially not young people, refused to live in new places, preferring to return to their homes in radiation-contaminated areas. There were about 1300 such people in 1987, and now there are just over 100 people. People living alone in the exclusion zone are called self-settlers, about whose life you can learn more by visiting the Chernobyl zone with a company Chernobyl-from-Kyiv.com During two and multy-day tour we can even visit some of them. 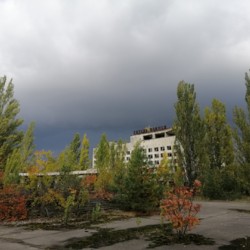