The Chernobyl Exclusion Zone is a territory in the north of Ukraine, contaminated with radiation after an explosion at a nuclear power plant on April 26, 1986. The Chernobyl Nuclear Power Plant named after Lenin is located on the territory of the modern independent state of Ukraine, which at the time of the catastrophe was part of the Soviet Union. The distance between the Chernobyl nuclear power plant and the capital of Ukraine Kiev is about 120 kilometers to the north. The area of ​​the Ukrainian exclusion zone is 2600 square kilometers (there is still a Belarusian exclusion zone of about the same size).The explosion occurred early in the morning and a huge amount of radioactive substances was released into the atmosphere. At first, the Soviet government tried to hide the scale of the catastrophe and even the very fact of its existence. They wanted to present the accident at the nuclear station as a small incident of small scale. Although the explosion had not really  much power, but its consequences became catastrophic, radioactivity spread throughout the world. Of all the countries over which radioactive clouds flew, Ukraine and Belarus were most affected.

Evacuation of the population from the Zone of radioactive contamination began in the afternoon of April 27 from the city of Pripyat. The city of Pripyat was built for power plant workers and is only two kilometers from it. Fifty thousand people were taken out of the city during three hours. The residents of Pripyat were told that they could return three days after the evacuation, but in fact, they never returned to their native places. Evacuation from other places occurred until August 1986. 350 thousand inhabitants of hundreds of villages were moved to other places of the Soviet Union.

To eliminate the consequences of the largest man-made disaster in the history of nuclear power was spent more than 18 billion rubles (at that time the ruble was approximately equal to the dollar). Such a strong blow to the economy of the USSR could not stand it, which, together with other factors, led to its disintegration in 1991.

In the current year, thirty-two years have passed since the time of the nuclear catastrophe,but the Chernobyl exclusion zone still remains a closed area for free visits. To get there on the excursion can only be accompanied by an experienced certified guide, which I am. I will gladly share with you my experience gained during more than three hundred already conducted tours. 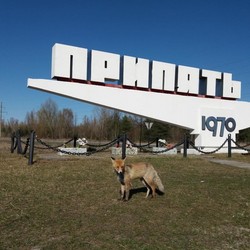