Radiation in the Chernobyl exclusion zone and radiatoin safety

There are three main methods of protection from radiation in the world: time, distance and substance.
1. More than thirty-three years have passed since the explosion of the reactor, and therefore the radiation levels by now have decreased thousands of times as a result of the natural decay of radionuclides. Also for tourists there is a five-day time limit for visiting the Zone, which can be increased in each individual case.
2. The level of radiation is inversely proportional to the square of the distance from the radiation source. This means that when the distance from the radiation source is 3 meters, the radiation level drops by 3x3 = 9 times. That is why the observation deck is located at a distance of 200 meters from the main existing radiation source - power unit number four.
3. Protection by the substance has now lost its meaning, at least for tourists. It is used only for specialists visiting an exploded reactor for research or other purposes (lead protective leafs).
In general, we can say that at present even a two-day excursion to Chernobyl is no more dangerous in terms of radiation than radiation exposure during a plane flight to Ukraine for 2-3 hours. (on board the aircraft at an altitude of 9000 meters, the radiation level is 0.3-0.5 microSievert, and in the city of Pripyat 0.2 -0.3 microSievert).
For additional control of the radioactive exposure of visitors to the Zone, each tourist is given an individual dosimeter showing the amount of radiation he receives during his stay in the Zone. Also, each person (regardless of his purpose of visiting the Chernobyl zone) at least twice undergoes dosimetric control at special checkpoints when leaving the ten-kilometer and three-kilometer buffer zones. Additional radiation control is carried out before visiting the canteen on the territory of the Chernobyl nuclear power plant.
I will be happy to answer all your additional questions on safety in the Chernobyl zone. Thanks for your attention. 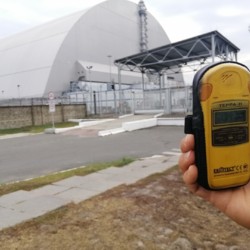