Kyiv and the Chernobyl disaster - «Chernobyl from Kyiv»
Contact us

Kyiv and the Chernobyl disaster

The site for the construction of the Chernobyl nuclear power plant was chosen in a wooded and swampy plain in northern Ukraine. This place was chosen because of its scarcely population, low soil fertility, the full-water Pripyat River nearby and a rather long distance to a large city. In those days, no one could even imagine that one hundred and twenty kilometers between a nuclear station and a city of two and a half million inhabitants was too short a distance. Literally the day after the accident, the then government decided to evacuate the 50,000th city of Pripyat, located 2 kilometers from the exploded power block No 4, and a few days later they began to evacuate all people living within a radius of thirty kilometers from the epicenter.
As you know, over time, radiation spread throughout the entire globe, although Ukraine and Belarus took over the bulk of the radioactive fallout. However, the Soviet authorities decided in every way to hide or at least downplay real level the  of radioactive contamination. So, in Kyiv, gamma radiation in some areas of the city exceeded the norm by hundreds of times. At secret meetings, the topic of the evacuation of the capital of Ukraine was discussed, which was categorically refused in the end. Instead of a complete evacuation of the population from Kiev, children and pregnant women were taken out. Moldova, Georgia, southern and eastern Ukraine temporary accomodated tens of thousands of children from contaminated areas. They spent the whole summer there, but by the beginning of school on September 1, they returned to their homes. In the Soviet Union, the real health and life of people were put behind the political goals of "prosperity and stability" of the communist system.
Due to the need to provide permanent housing to replace the temporary one where the evacuees lived, there was a surge in construction in Kiev. So, the sleeping areas Obolon, Troyeshchina and Kharkivsky were powerfully built up, where many immigrants and their descendants still live. Considering that the above-mentioned areas are located in low-lying lands, sand was washed there before construction, the quarries that appeared after the excavation of sand became lakes within the city. If you contact me during your visit to Ukraine, I will organize for you not only an interesting tour to Chernobyl, but also take you to the most interesting sights of Kyiv. Previously, you can familiarize yourself with the terms of the Kyiv tour on the website: https://kyivcity.tours/ or I can make an individual tour for you in accordance with your wishes and preferences. Thank you and welcome to Kyiv. Sincerely yours, Serhii Uzlov 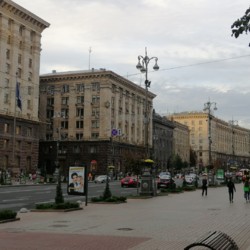