The nuclear power industry has a rather low efficiency of about thirty percent. Thus, the thermal capacity of the Chernobyl nuclear power plant was 3200 megawatts, and the electric power was -1000 megawatts per each power unit. This mean that about two-thirds of the power generated by the power plant simply warmed the environment. That is why nuclear power plants require a significant amount of water, in our case this source was the Pripyat River. However, to prevent radioactive contamination of the river in the event of a possible accident, a pond was built at the industrial site of the Chernobyl nuclear power plant for cooling purposes, the area of ​​which was about 24 square kilometers. The pond physically was separated from the river. The water level in this pond was seven meters higher than the water level in the river and was supported by powerful pumps that pumped water from the river. This pond served four power units and its cooling capabilities were practically riched the limit. Therefore, for two more reactors, which were under construction - number five and number six, two cooling towers with a height of 150 meters were being built. These cooling towers are the first to greet us at the entrance to the industrial site of the power plant. One of them has 90% readiness and a height of about 120 meters, and the second has just begun to be built and only slightly rises above the ground. The principle of operation of a cooling tower is simple and consists in cooling hot water as it falls from the upper level to the ground, which occurs in a natural upward flow created in the cooling tower. These two structures are among the main must-see places that tourists usually visit during two-day tours.
The cooling pond is currently went semi dry, but is still a favorite resting place for migratory birds during their flight from the northern territories to the south and vice versa. If the tour lasts more than one day, we will definitely visit the remains of the cooling pond, fish and fur farms located next to it. 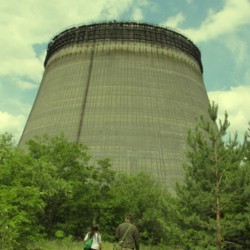